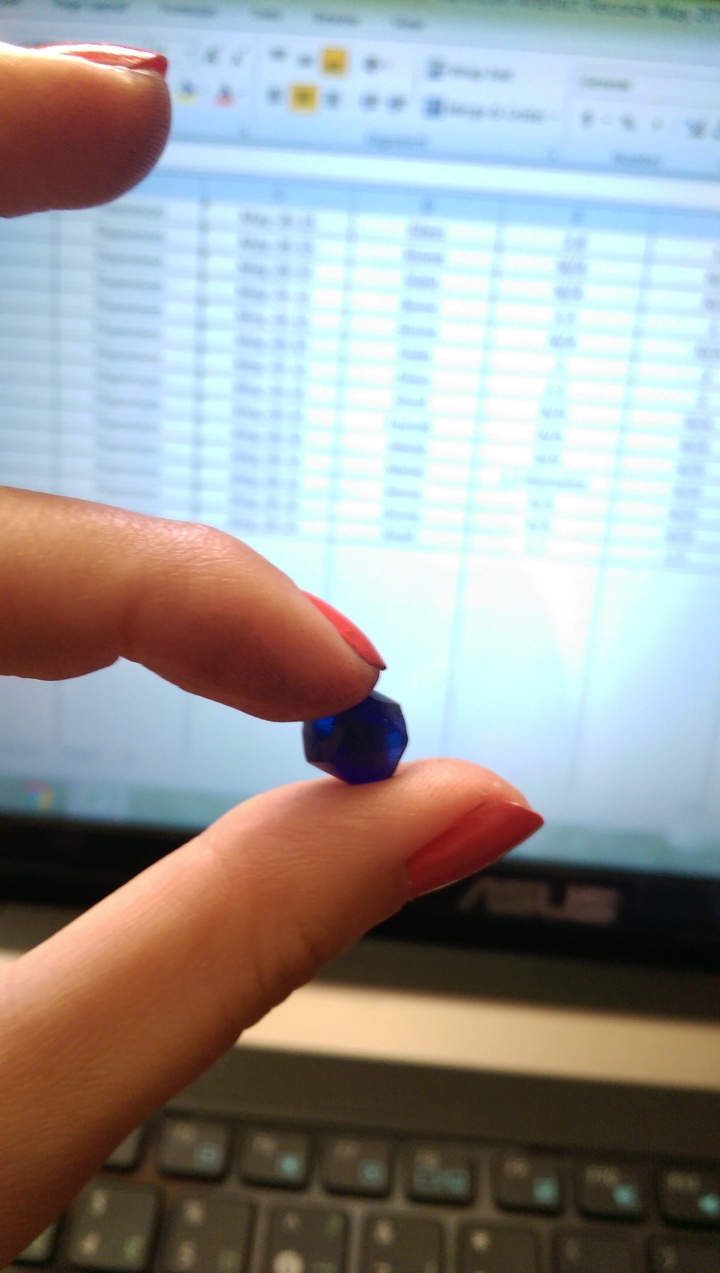 Pic: Theory allows us to see artifacts as artifacts, from how we excavate them in the field to how we analyze them in the lab.  Without theoretical knowledge, that bead is just a bead.  But with a good theoretical background, that bead will tell me a lot more information other than the fact that it’s a Russian trade bead.

Theory.  It’s a word that sends shudders down any archaeology student’s spine.  I think it’s pretty safe to assume that we ALL have to take a theory course at some point in our student careers.  For me that time has come during grad school.  For others, it comes during undergrad.  I like theory, but admittedly there is something entirely unappealing about having to take a theory course.  Theory forces us to think about difficult things.  It’s pretty meta, it makes us think about thinking.  Or rather think about how we’re thinking about things.  And there are a lot of ways to think about things.  Long story short, theory gives us A LOT of skull-cramps.

The first step in accepting theory is accepting the fact that our data is theory-laden.  Consciously or not, the theory we’re exposed to through school and/or our work affects our data.  Dare I say that it makes our data?  Theory teaches us how to excavate and how to interpret what we’ve excavated (both in the field and in the lab).  Without it, our data is meaningless.  How do you know a lithic flake is a lithic flake?  Because you have the theoretical knowledge to interpret what you’re seeing as being a lithic flake.  Would that flake be a flake if you didn’t have the ability to interpret it as a flake?  Pretty meta, I know.

My goal today (and perhaps in future days as I continue to add to this list) is to introduce to you some of the ways in which we think about archaeology (focused on North American archaeology).  This is by no means a conclusive list, it’s simply an introduction to some of the bigger, more well-known theories out there.  I also won’t be giving my opinion on any of these theories because I don’t want to bias any of you into agreeing/disagreeing with any of the theories.  You can decide for yourself what you like and don’t like.  This list is also by no means complete and will be an on-going work in progress.  So, without further ado, here’s some summarized theoretical information for you!

Agency: I don’t know if I would call ‘agency’ a theory, but it’s a concept that is involved in many other theories so it’s really important to include it on this list.  Part of post-processualism, agency is having the capacity to “act” in a given environment and engage with society, unconsciously or not.  Humans have the choice to act how they want to act and don’t blindly obey all the rules.  Humans can bend the rules, and these bends in turn result in societal change.  Post-processualists argued that processualists ignored the role of human agency in interpreting past societies.  There’s a lot of debate about what has agency – is it only humans?  Can materials have agency?  Lindstrom and Barad both give excellent discussions on the idea of agency, especially Barad’s idea of agential realism.

Behavioural Ecology: A branch of evolutionary archaeology which assumes that cultural/behavioural changes resulted from phenotypic adaptations to varying social and ecological environments.

Conjunctive Archaeology: (developed by Walter Taylor, 1948) Developed out of a criticism of early descriptive, historical approaches to archaeology, conjunctive archaeology promotes archaeology as being an integrated discipline that includes the study of many different archaeological elements (diet, settlement, technology) to form a more well-rounded view of the past.  In simpler terms, Taylor argued that archaeology was actually multi-faceted.  If this sounds like the archaeology we practice today, that’s because it basically is.

Culture-Historical archaeology (and the Normative Model of Culture): Culture historians believed that archaeologists could use material culture to divide past societies into distinct ethnic and cultural groupings.  Culture-historians believed in the Normative Model of Culture, which defines culture as a set of shared ideas (norms).  Culture-historians championed the ideas of cultural diffusion (explaining changes in a culture’s history as being the diffusion of ideas from one culture into another) and cultural migration (changes could be explained by the migration of society members into a new area.  Culture-historians typically turned their nose up at the idea that independent cultural development could occur within a society.  Culture-historians rely on inductive reasoning for their arguments (i.e. If B, C, and D are observed to be true than A might be true).

Direct Historical Archaeology: believes that knowledge from historical sites can be extended further back into the past.  The information from the most recent sites can be used as analogies/homologies for the prehistoric sites.  This really only works in areas where there is continuity between historically documented societies and prehistoric societies.

Feminist Archaeology: One could argue this falls as a branch on the gender archaeology tree, but it still deserves its own discussion.  In a simplistic sense, feminist archaeology aims to switch the bias in archaeology from androcentric (Male perspective on male activities, putting male ideals as the central focus of discussion and interpretation) to gynocentric (Female perspective on female activities, putting female ideals as the central focus of discussion and interpretation).  Feminist archaeology doesn’t only focus on women, it has been notable for its discussions on many groups oppressed by social inequality and/or marginalized by conventional gender structures.  Feminist archaeology commonly employs intersectional analysis, or the idea that gender can only be fully studied in conjunction with other forms of identity.

Marxist Archaeology: Marxist archaeology is exactly what you think it might be – archaeological interpretations within the framework of Marxism.  In other, very simplistic words, the idea is that societal changes arose through class struggles.  It relies on the idea of historical materialism, or the mental “givens”, things that are unconsciously obvious or natural to a society’s members. Organization and development of societies is determined by the material means (mental things) in which people produce and reproduce what’s needed to function.  Social classes (and the relationships between them), political structures, and ideals/beliefs are reflected in a society’s economic activities.

Middle-Range Theory: Technically this falls under systems theory, but archaeologists have argued over MRT enough that I think it deserves its own special mention.  MRTs are theories that explore the relationship between human behaviour and what’s observed in the archaeological record.  MRT was the brainchild of Lewis Binford and was developed out of ethnoarchaeology and taphonomic processes, with emphasis on the relationship between archaeology and the natural sciences.  Its goal was to serve as a bridge between what’s being seen in the archaeological record and inferences about the human behaviour (i.e. site formation processes).  The biggest critique of MRT was that it was being used as a universalist explanation with untestable conclusions drawn- that it could be applied to cultures everywhere and assumed that cultures around the world developed according to the same systemic processes. Archaeologists argue that this is untrue and that instead MRTs should be used to develop smaller, intermediate, testable hypotheses to explore links between human behaviour and the archaeological record.

Phenomenology: Basically, using our senses to interpret an archaeological site.  Using our sense of sight, smell, hearing, and touch might lend insight into understanding how historical people who once lived there might have interpreted the landscape.

Practice Theory: How humans, with different intentions and motives, shape the world in which they live.  According to Ortner, it sort of seeks to find the middle ground between structuralist theory and human agency, especially individualism, by seeking to understand the relationships between human actions and “the system”.

Structuralism: A hallmark of post-processual archaeology, structuralism works with the assumption that the human mind categorizes and divides things, and creates contrast and opposition (i.e. life/death, male/female, day/night).  A brainchild of Levi-Strauss, the basic idea is that the human mind creates these dichotomies and that everything we do is, consciously or not, governed by these dichotomies.  Differences in cultures arise out of unique selections of dichotomies.  All material culture is determined by these mental structures and studying the material culture could reveal the mental structures behind it, and all material culture is considered equal with regards to the organization of the total structure of a culture. Basically, we understand culture in terms of its relationship to the larger overarching system/structure

Systems Theory: Championed by Flannery and Binford, systems theory is the idea that by breaking down our focus onto the interactions of different variables within systems we can present an unbiased view of past cultures.  It doesn’t matter what we’re looking at because we’re really just focused on the systems which produced it.  Systems theory could be applied to any culture and, according to Binford, consisted of 3 theory ranges.  Upper range theory could explain a specific aspect of a specific culture (why were there still hunter-gatherers in some areas of North America while in other areas there was agriculture?).  Middle Range Theory could explain any cultural concept outside of is cultural context and attempt to connect the data to the behaviours that produced them (i.e. that projectile point means these people were hunter-gatherers).  Lower Range Theory explores any cultural systems independent of specifics/nature of variables (i.e. is this triangle-shaped, worked rock a projectile point?).

One thought on “Knowledge Feature – Theory”