Pic: Wolverine K981.02 (FYI all the photos in this post were taken by me, as a young, inexperienced wolverine skeleton photographer)

Many years ago I had the chance to examine a wolverine skeleton.  What drew me to this particular wolverine were the pathologies.  This poor lady was riddled with them, literally from head to toe.  Archaeologists and palaeopathologies have long been interested in the transfer of disease from animals to humans, but few studies have focused on the palaeopathologies of fauna themselves.  This was my attempt at doing so.  Full disclosure: I’m not a zooarchaeologist.  But I felt I may still be able to contribute worthwhile information with my training in osteoarchaeology and palaeopathology.  So I gave it a go.

First of all, wolverines are totally badass.  Gulo gulo is the largest member of the weasel family (Muselidae).  They have insanely strong jaws – so strong that the articulation of the mandible with the skull makes them difficult to separate in a skeletal sample.  Males are typically larger than females and both reach skeletal maturity by the age of 9 months.  They typically weigh between 10 and 18 kilograms, though can sometimes be larger (up to 30 kg).  Males reach sexual maturity by 1 year and females by 2 years.

Wolverines are known for their ferocity and tenacity.  They’re adorable as heck, but they

have no problem attacking predators much larger than themselves to scavenge or protect their own kill.  I’m talking taking on bears.  They’ll actually fight bears.  They also happily hunt elk and moose in the winter when they’re massive paws act as snowshoes and give them an advantage over the clumsy ungulates.  Definitely badass.

This particular wolverine was numbered K981.02 and can be found in the zooarchaeological collections of the University of Alberta.  Nothing was known about her, other than she had been donated from the Alberta Game Farm in 1981.  The skeleton was complete and due to the smallish sagittal crest and lack of a baculum, I determined it was a female.  All her epiphyses were completely fused so she was definitely an adult.  And from the looks of her, she was likely a very mature female.  Literally from her head to her paws she was riddled with pathologies like cracked teeth, extreme osteophyte growth, infection, and healed trauma.

The Skull and Mandible 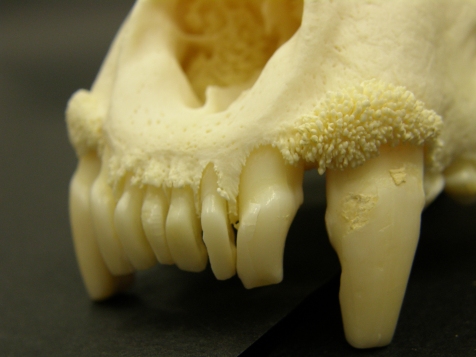 Osteophytes over both canines and the upper incisors

Odd osteophyte growth on the vertebrae 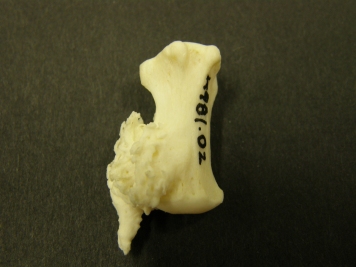 I wrote this report way back in 2011.  Looking over the images again today, I’m still shocked by the number of pathologies and their seemingly wide variety of possible causes.  As is the case with human palaeopathology, I developed a differential diagnosis to attempt to explore some of the possible causes, which I’ll highlight some features of below.

As no information is known about wolverine K981.02 from its time in captivity at the Alberta Game Farm, it is impossible to know whether the pathologies observed occurred during captivity or before.  Many of the pathologies appear to easily fit in with a wild life style.  For example, the fracture to the left fibula.  If the wolverine was captive when the fibula was fractured it would be assumed that the caregivers would seek veterinary care to heal the fibula.  While the fibula healed well with no evidence for infection, the malalignment suggests that no veterinary intervention was made to heal the injury.  Because remodelling of the callous bone at the fracture site was complete, the fracture had most likely been suffered long before the wolverine came to be in the Alberta Game Farm’s care.

Injuries to the front paws would be expected in a wolverine.  The swollen appearance of some of the phalanges, caused by a periosteal bone reaction, could have been caused by trauma or infection.  In the wild wolverines use their strong and large front paws for digging.  If something had pierced the paw of the wolverine while digging, for example a sharp rock or stick, the trauma could have been deep enough to affect the periosteum and trigger bone formation.  Alternatively, a superficial cut to the paw may have become infected and that infection may have triggered a periosteal bone reaction in which new bone was formed.  Because the bone was still slightly porous in appearance and not completely remodelled, these pathologies were still the stages of healing, suggesting they had been suffered a few months before death.

The osteophytes seen above the canines in the maxilla are puzzling, though the predominantly scavenging lifestyle of the wolverine may be accountable.  Wolverine jaws are incredibly strong and made for the ability to crunch through bone.  If a wolverine was eating a fresh kill, either made by itself or another predator, the bones of the carcass would still be relatively soft and likely not produce sharp, jagged splinters.  If a wolverine was eating a carcass that had been dead for a few days, however, the bones would be less soft and more likely to produce sharp splinters.  Wolverine K981.02 may have produced bone splinters by biting into a scavenged bone.  These splinters may have been sharp enough to pierce the gums and scrape the maxillary bone just above the canines, triggering a periosteal response resulting in osteophyte growth.  A bacterial infection may also explain the osteophytes, using the same idea of bone splinters wounding the mouth.  Bacteria entering these wounds may have resulted in an infection triggering osteophyte growth.  Dental disease, such as caries and periapical abscesses were not observed and thus not considered a cause for these osteophytes.

The changes observed in the vertebrae of wolverine K981.02 are very intriguing and may have resulted from either a degenerative disease associated with age, or an infectious disease.  There was no observed eburnation, a diagnostic feature of osteoarthritis (referred to as spondylitis in the spine), so I pushed OA closer to the bottom of the list of possibilities.  There was also no trauma observed in any of the vertebrae, so I ruled that out as a likely cause.  I then turned my attention to infectious disease.  One possibility was tuberculosis (Mycobacterium tuberculosis), which can infect caribou and bison, both species wolverines can come into contact with.  The observed changes in the vertebrae were quite different from those associated with tuberculosis, however, so I pushed that further down the list of possibilities.  A second infectious disease wolverines can be infected with is brucellosis.  Brucella suis has been reported in caribou and reindeer and affects the spine.  It causes destruction of the centrum in manners similar to those observed in K981.02.  It also forms a style of curved osteophyte referred to as a “parrot-beak” osteophyte.  The curved appearance of many of the osteophytes in K981.02 gave me reason to consider brucellosis as a possible cause.

So there you have it.  A palaeopathological exploration of wolverine K981.02.  It’s also a classic case of the osteological paradox.  The only reason these pathologies grew to be so severe was because she was tenacious and badass enough to live long enough for that to happen, as painful as many of them might have been.  She remained “healthy” enough for the osteophytes to grow, possibly due in large part to veterinary care she likely received at the Alberta Game Farm during her time there.  At the end of the day I can only form educated guesses about what her life was like and what caused all of these pathologies, and there is certainly room for many alternative explanations, all of which are greatly welcomed.

COSEWIC. 2003. COSEWIC assessment and update status report on the wolverine Gulo gulo in Canada. Committee on the Status of Endangered Wildlife in Canada. Ottawa.

One thought on “The Pathologies of Wolverine (Gulo gulo) K981.02”