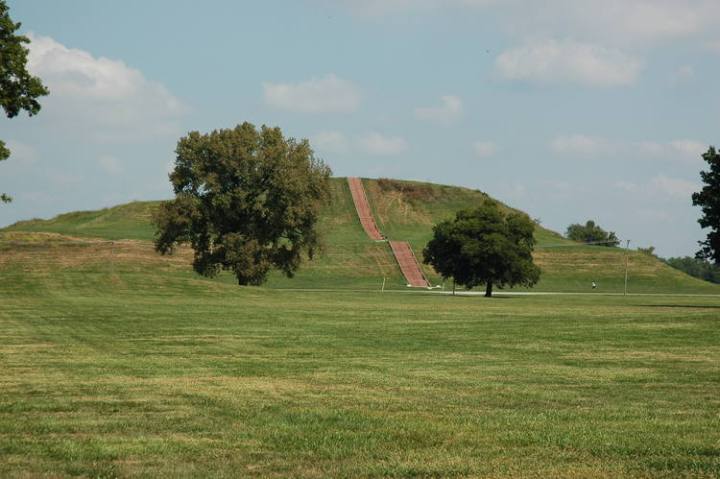 Pic: One of the mounds at Cahokia, a UNESCO World Heritage site

I think it would be a bit of an understatement for me to say that climate change has been on peoples minds lately.  Rightfully so.  There is NO denying we’re faced with global warming right now and it’s dangerous to think otherwise.  The thing about climate change is that it’s real, whether you believe in it or not.  Denial or refusal to learn about the effects of climate change can lead to situations like pulling one of the highest carbon emission producing countries out of a global pact designed to protect the climate and mitigate climate change effects so you can renew and push forward environmentally damaging resource industries.

The recent news with the USA turning its back to the Paris Accord (sorry, I should have specified the President turning his back, because it certainly is clear he doesn’t speak for his entire country) has demonstrated the dangers of ignorance toward climate change, and science as a whole.  But it’s also highlighted the fact that although it’s a term everyone has heard about, not everyone might be aware of what exactly climate change is and how it could affect not only our planet but our lives.  Climate change affects EVERYONE.  And it has been, for thousands of years.  Today I’m going to give you a brief bit of archaeological insight into climate change which demonstrates the effects of climate change on societies in the past.

I am by no means an expert on climate change.  That being said, I have enough of an understanding of climate change to give you a brief lesson (which should be the goal for everyone – learn enough to know what it is).  Climate change, broadly and basically speaking, is an alteration to the climate.  Sometimes this means temperatures drop.  Sometimes this means temperatures rise.  Sometimes climate change is regionally specific, other times it happens on a global scale.  Check out NASA’s fantastic website for more information on climate change.  These temperature shifts can affect the planet in dramatic ways, from changing the types of vegetation that grows to raising or dropping sea levels and effectively physically losing land to live on.  In a world reliant on farming (animal and botanical) and living in large urban centres that tend to be clustered around oceans, seas, and rivers, you can probably figure out that we may be in trouble with changes to the food we can grow and the places where we live.  In the past, these temperature changes were caused by natural events (i.e. a volcano eruption, as I referenced in my post about Ragnarök).  In our more recent history, however, climate change has been caused by the methods humans have been using to modify the world in which we live.  For example, during the Industrial Revolution we became reliant on the use of fossil fuels like coal, which when burned releases greenhouse gases and traps heat and results in the greenhouse effect.  That’s one of the reasons the world has agreed it’s best to decrease our use of coal.

Today we live in an epoch (fancy word for time frame) called the Holocene, which began approximately 11,500 years ago with very abrupt climate change called the Younger Dryas (though there’s on-going discussion about the possibility we’re in a new epoch called the Anthropocene).  The Younger Dryas (12,500 – 11,500 yrs ago) was a long-lasting series of temperature drops that drastically altered the vegetation of the world, causing a shift from warm vegetation to cold vegetation (we know about vegetation changes through palynology – the study of pollen – of ice cores and other sediment samples).  Following the Younger Dryas the world fell into a warming period and the Holocene began.  It’s in this current Holocene period where we see the dramatic rise of modern human cultural practices (i.e. agriculture, larger towns/villages, political systems, etc).

The Holocene hasn’t been a straight line on a chart of happy, steady temperatures.  It’s been marked by high variability and several smaller climate events, which we see best through the Greenland Ice Cores.  Take a look: 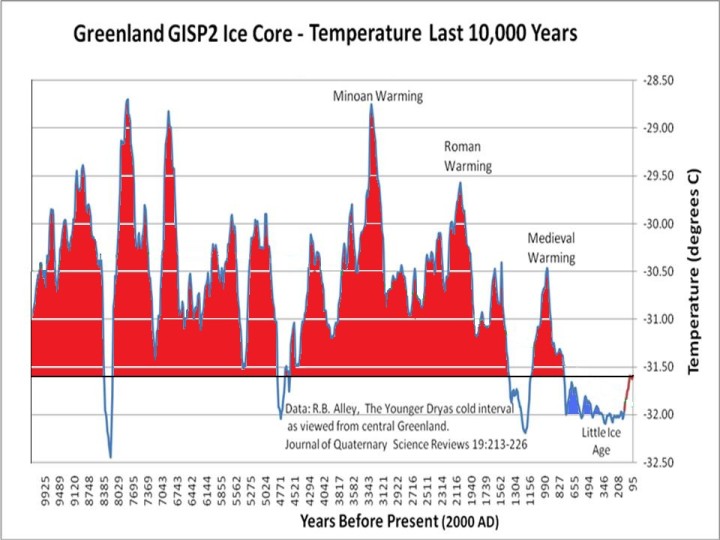 All those spikes on the top represent warming periods, and the spikes below the black line are cooling periods.  Temperatures have fluctuated across changes of 4°C.  Which may not sound like a major change to you, but archaeologists have long examined the effects of those temperature fluctuations/changes to palaeoclimates on societies in the past.  How do we do this?  To take a really complex topic and simplify it (which definitely runs the risk of oversimplification), we look for matches between archaeological data and palaeoclimatological data.  What have we noticed?

In addition, take a look at my Ragnarök post for other examples.  These are only a small selection of examples of societal changes archaeologists have noted as being correlated to climatic events.  Other events archaeologists have been interested in studying are disease epidemics, like the Justinian Plague, which often accompany dramatic climatic changes and changes to our food supply (loss of food = lack of nutrition = our body is unable to defend itself against disease).  This article, though speaking about our current situation, summarizes nicely the negative effects climate change can have on our health.

Imagine a world in which temperatures have risen so much so that our farming methods begin to fail.  Farmed crops and natural vegetation begin to slow in growth.  Some doesn’t grow at all.  Animals begin to suffer because herbivores can’t feed themselves enough to support their numbers.  They begin to die, making predators happy for a short while and their populations spike.  But eventually there’s not enough prey for them to survive so they begin to die as well.  Disease also begins to move into the remaining animals, decimating their already weakened populations.  People who have returned to hunting to make up for the loss of domestically farmed animals find themselves over-hunting the wild animals that are left, slowly leading to the extinction of many species. Meanwhile, the ocean and river levels have risen enough that they’ve flooded the cities built on their banks.  People begin to move more inland and find themselves getting increasingly closer to other migrating populations.  Warfare begins to break out over the remaining space for habitation and agriculture.  People are fighting for space and food.  Population levels begin to decrease, with them going the experts in city-planning, health-care, agriculture, etc.  Those who are left have lost enough knowledge and skilled experts that they can’t afford to keep up subsistence practices to feed those who remain.  Like it happened with the animals, disease begins to take advantage of weakened immune systems.  And because people have clustered into close quarters with other people, disease spreads quickly.  Some people survive, but it will take a long time for the world to return to some sort of resemblance of its former glory.

If you think that sounds dramatic, I hate to disappoint you but it’s really not.  Archaeological examples from around the world and across a wide variety of time periods have demonstrated that I’m not being dramatic.  And if we don’t start paying more attention to our climate now than that’s the future we’ll be facing sooner rather than later.

The changes in greenhouse gases since the Industrial Revolution