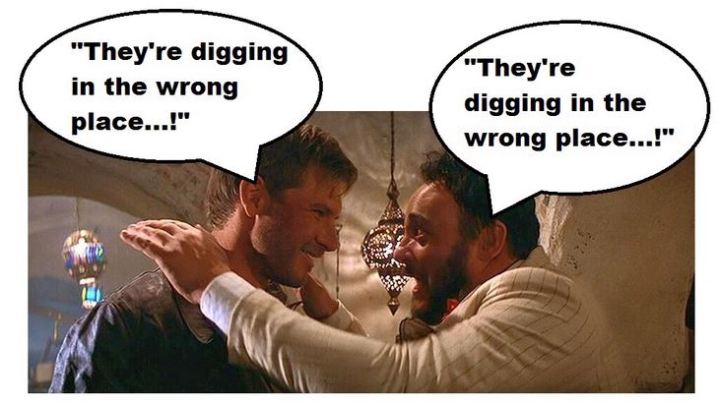 Pic: The inspiration for this blog series title, from Indiana Jones and the Raiders of the Lost Ark (Image borrowed from a website about a map program)

To be completely honest, I love them all. I am a huge sucker for dramatically fictional accounts of archaeology-gone-wrong. It goes hand-in-hand with my love of really bad horror films. Books like The Ruins and movies like As Above, So Below are my not-so-guilty pleasure. I can’t get enough of them.

You can put a bad archaeologically-themed novel in a girl’s hand, but you can’t take the archaeologist out of the girl. Try as I might, I can’t entirely let my mind wander while reading or watching these movies. Part of what makes them so terrible is that the archaeology itself is usually pretty bad, and my brain goes straight to those details. This isn’t a knock on authors or movie directors. They’re clearly very talented at their craft. They just haven’t done enough research into what archaeology really is. Or any research at all and instead are working off their wild fantasies. They’re, “digging in the wrong place”, if you will, to create their work. These factual errors are more than just a simple annoyance to archaeologists – in many cases (even though it may be unintentional), they can result in dangerous pseudoarchaeology (I’m looking at you, Ancient Aliens) and promotion of myths rooted in racism that are easily believed by uncritical minds.

I’ve twice had the opportunity to consult/review creative works for archaeological accuracy. The first opportunity was a couple of years ago when I was approached by Stephen Legault as he was writing his novel, The Same River Twice. We chatted back and forth about forensic anthropology and what worked/didn’t work in his novel, which was a super fun experience for me. More recently I had the opportunity to write a review on the new Tomb Raider comic series for Women Write About Comics. I had a ton of fun with this review not only because I love comics, but because it also gave me a chance to talk about public perceptions of archaeologists (more specifically women archaeologists), something I’m really interested in pursuing further (this article is a good look at why I’m interested in it).

A few nights ago I sat down to start reading Excavation, by James Rollins. Though I’m enjoying it, by 50 pages in I already had a growing list of factual errors. And thus “Digging in the Wrong Place” was born. In this recurring series, I’m going to review novels for their archaeological accuracy. I don’t really care if it’s set in our modern world or off on an alien planet. What concerns me is the portrayal of archaeologists and archaeological theory and methodology. I’ll spend some time delving into the truth

behind the words. For example, in Excavation one of the characters uses skull morphology to determine that the mummy under investigation is European. More specifically, Portuguese. The character claims she can be even more specific by being able to narrow down the province in Portugal. I hate to break it to you, but skull morphology is not how we do that, and you can look forward to a good discussion on the use of stable isotopes. Elsewhere, the same character is very definite about an age estimation of exactly 32 years old at death. Nope. We’re never that specific and I’ll explain how we use dentition and fusion markers to determine age ranges.

Basically, this blog series is a chance for me to have some fun (I love reading, as I’ve already pointed out) while also pursing my interests in the public perceptions of archaeologists and the debunking of pseudoarchaeology. All the while sharing more information on the sciences behind archaeology. I’m hoping you’ll all have fun reading along, and if you have any suggestions on books I should read send them my way!

What Archaeologists Really Think About Ancient Aliens, Lost Colonies, and Fingerprints of the Gods

This presentation from Dr. Ethan Watrall’s 2013 Intro to Archaeology class

Anything by Dr. David Anderson. His blog, Archaeological Odditities, is a great source of information on his work examining pseudoarchaeology and the public perception of archaeology.