Pic: View of the historic Britannia Shipyards in Steveston, BC. I grew up in Steveston and it feels so good to finally be home after 4.5 years away!

After almost 4.5 years of living in Ottawa, it finally happened – we moved back west. More specifically, we moved back to the southern coast of British Columbia, where our friends and family are and where we grew up. And I have to say I’m pretty excited to be back!

This move certainly didn’t just happen overnight, and it was fraught with some unique challenges that my husband and I were certainly up to taking on! This move we decided to try something a little bit different. We wanted to slow down and enjoy the trip a bit more by camping our way back. We were going to be travelling across most of the country and camping would give us a chance to see a bit more of it. I definitely found a way to tie some archaeology into the trip. And UFO’s. Yes, UFO’s. It was a really interesting trip and I’m excited to share some highlights with you!

I talk about my cats a lot, so you probably know by now we have three of them. They’ve done plenty of car travelling so we knew what to expect in the car. But none had ever been camping before. We had no idea how they would react to being in a tent. I was genuinely worried they would be loud and attract predators, like bears and cougars, because one of the three is very talkative. Fortunately, all three cats were AMAZING! They loved being in the tent with us! We quickly fell into a routine for setting up site (and we became skilled at setting it up fast), which helped the cats relax. After the first couple of days they started to know what to expect. And since we let them play with the sleeping bags long before we left for our trip, the sleeping bags in the tent were a familiar item. They really enjoyed relaxing inside the tent at the end of each driving day!

Since the cats were calm we were calm and it felt great to be camping again. It had been far too long since our last camping trip. That being said, we did find ourselves in a couple of precarious situations.

1) Weather. We were plagued by rain. It rained every single night we camped. Our third night, however, was genuinely scary. We were camping at Big Whiteshell Lake in eastern Manitoba. As we started to drift off to sleep around 10 pm I heard a few small rumbles of thunder. To be expected on summer nights in the prairies. By 1:45 am, however, I was waking up to a full blown, incredibly severe thunderstorm that was literally directly above us. Nonstop flashes of lightning. Massive rolling booms of thunder. Downpours of rain. Pounding hail. Wind so strong it was almost caving in our tent. And because it was the prairies, we also started to worry about tornadoes. And the trees around us coming down. It was at this moment that we really realized how amazing it was that our cats actually enjoy thunderstorms. We began looking and reaching around for the cats to make sure they were ok. Ribbit was lying beside me, stretched out, relaxed, and purring the moment I patted her. Rocket was sleeping on my feet. Riled got up to use the litterbox. And when we woke up again around 4 am to find the storm still raging, the cats were still very relaxed. They definitely got some extra treats the next day!

2) Wildlife. We made sure to keep ourselves informed of what kinds of wildlife we could encounter at each site, with coyotes, bears, deer, and elk being the most likely. On our 4th night of camping, just south of Saskatoon, we heard coyotes howling and yipping through most of the night and made sure to note if they were getting closer or staying away. Even without having cat food in the tent, the cats themselves could be tempting to predators!

It was our 5th night and final night of camping when we encountered serious wildlife concerns. We had plans to camp in Jasper National Park in Alberta. It’s a gorgeous park loaded with wildlife, like elk, bighorn sheep, bears, and wolves to name a few. We had heard that this year the bears were quite active in the park and as we were driving to our campgrounds we checked the bear sightings reports for the park. It was there that we saw a warning posted for our campground that grizzlies had been actively hunting elk calves in the area. Pulling into the campground the park ranger informed us bears had been coming through almost daily. Bright yellow warning notes were posted all around the campground. And on a tree literally in the centre of our specific campsite, we found bear scratches in the bark. Grizzlies are not something you want to take risks with and we decided we weren’t comfortable putting ourselves and the cats in a tent with a higher than normal chance of a bear encounter. So off to a hotel we went!

Thunderstorms weren’t the only thing we encountered in Manitoba. Shortly after we set up our campsite we discovered we were camping close to Falcon Lake, the site of the infamous 1967 Falcon Lake UFO encounter. Had we been there a couple of weeks earlier we could have gone on a hiking UFO tour to the site of the encounter!

In May 1967, Stefan Michalak was looking for quartz and silver around Falcon Lake when he noticed two long, cylindrical objects hovering nearby. One of the objects then landed on a rock and the second flew away shortly after. Michalak cautiously approached the large landed object and spent some time peering inside an open doorway, noting strange voices, machine-like sounds, and bright flashing lights. As Michalak stepped away, a panel sealed the door shut. A blast of gas and hot air struck Michalak in the chest, knocking him down and burning his shirt before the strange object flew away. For weeks afterwards Michalak was plagued by negative physical effects like diarrhea, blackouts, and weight loss. In addition, an odd grid-like pattern of burns and later raised sores appeared on his chest and stomach.

To this day, Michalak’s experience at Falcon Lake in 1967 continues to be one of the world’s most famous UFO encounter stories. So much so that the Royal Canadian Mint has released a special coin commemorating the event. Coincidentally, a few months later in November 1967 would be the infamous Shag Harbour UFO incident in Nova Scotia.

Part way through our trip I received a great tip on Twitter from Canadian historian Dr. Ben Bradley, who suggested that as we left Jasper National Park we should stop by the site of the old railway town Lucerne, BC, which was located only a few kilometres west of the BC/AB border. And on the morning we left Jasper we did just that. I had no idea what to expect. A – Would Lucerne be a ghost town with empty, derelict standing structures? Or B – had the forest reclaimed the old townsite to the point there was nothing left? Would I be able to find the town at all?

As we pulled off the highway and parked the car, it was immediately apparent that the forest had gone with option B – there was no sign of Lucerne’s old structures. Thanks to a handy map provided to us with X’s marking the spots of the old buildings, I at least had an idea of where to look. With the threat of both rain and bears, I didn’t have a huge amount of time to explore the forest so I headed straight toward the spots where the southwestern buildings once stood. I stepped into the forest and as I reached the spot of the first building I had the living daylights scared out of me by a large golden eagle that was sitting low in the trees. I had startled it and it loudly voiced its displeasure at the interruption before flying away a moment later.

As I tried to get my heartbeat back under control, I kept looking for any sign of the old structures. On the southwest side of the town, the closest I could find in my limited time was a particularly square-edged, flat area of vegetation. It might have been indication of the corner of a former building. Not wanting to venture too far into the woods away from the car, I decided to quickly try the southeast edge of the former townsite. As I headed toward the red X on the map for one of the former buildings, I wasn’t seeing much through the thick vegetation. Until something on the ground caught my attention. I ventured over and pulled back the moss and low and behold it was a large piece of metal! A definite indication of human activity, and right where the map said it should be. With that small uncovery and rain starting to fall, I quickly made my way back to the car and we hit the road for our final day of driving back to our home. 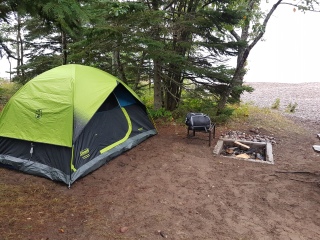 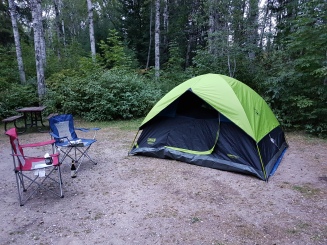 LIKE WHAT YOU’VE READ? A $3 DONATION THROUGH KO-FI SUPPORTS ARCHAEOLOGICAL RESEARCH AND OUTREACH ON BONES, STONES, AND BOOKS

One thought on “Moving West: UFOs, Ghost Towns, and Bears”