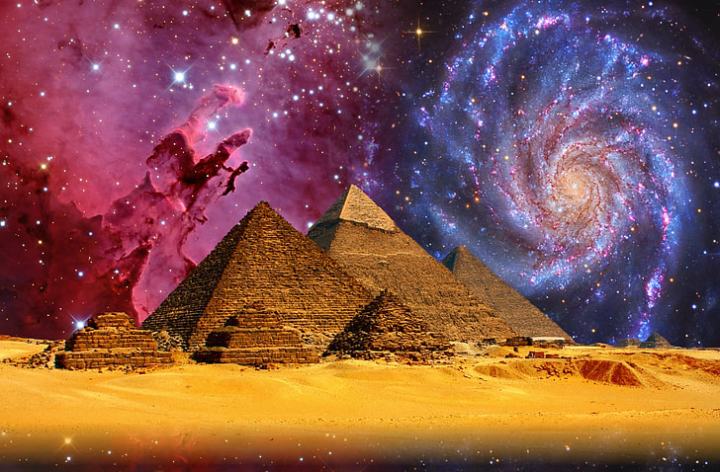 Pic: To be honest, it’s just a fancy pyramid image I found in a Google search that’s vaguely reminiscent of the idea of pyramid power and sacred geometry

So we’re in the midst of a worldwide pandemic right now (COVID-19), and each country and provinces/states within countries are trying to manage it and respond to it in different ways. Some more effectively than others. British Columbia, where I live, has declared a state of emergency and with that comes many restrictions. Many non-essential stores are closed. People are strongly encouraged to stay inside their homes unless they have to get groceries or medication, and if you do go out you have to socially distance yourself (keep 2 metres away from everyone else). Gatherings of more than 50 people are banned. Restaurants have been ordered to shut down their in-restaurant dining areas and can only service customers with take-out/drive-thrus. Liquor stores, however, are allowed to remain open. And since liquor stores are staying open and I’m home for the time being, it’s an opportunity to try a wine I’ve been recommended. So let’s talk about wine for a moment. Or, more specifically, a winery in southern B.C.

Outside of Egypt, a few appropriated Egyptian-style pyramids exist. If you’ve read my blog post about the 3rd and 4th episodes of Blood and Treasure, then you’ve already seen me talk about the Tomb of Cestius, a pyramid tomb built in Rome just over 2000 years ago. In 1991 in Memphis, Tennessee, the Memphis pyramid was opened, intended to be an entertainment complex inside of a building that was a 2/3 scale of the Giza pyramids (though only one pyramid was built). And in 1997, the Summerhill Pyramid in Kelowna, British Columbia, opened its doors.

The Summerhill Pyramid is used by the winery for aging their wines. Which makes a lot of sense, to be honest. The Okanagan is a hot, literal desert and for best results you want to age your wine in cool, dark locations. The pyramid, whose base was built into the surrounding earth and which has and air vents at the peak and no windows, would be an ideal place to age wine if you’re looking for a cool and dark location. And a pyramid was chosen specifically for providing a good environment for aging wine. It’s the reasons behind “providing a good environment” that I want to talk about, because they’re probably not reasons you would normally expect.

You can find a detailed description about the pyramid and the winery’s reasons for building the pyramid on the winery’s website. They describe the pyramid as a “sacred chamber” where the “knowingness of eternity awaits”. It goes on to explain that the effects of the pyramid are clarification and enhanced receptiveness, both in humans and the wine (the common denominator between humans and wine, according to this website, is that they’re both mostly liquid. So what effects the wine will also effect humans and vice versa). You probably won’t be surprised to hear that one of the major proponents for this idea of pyramids having special powers, like what Summerhill has described, is in Erich von Däniken‘s work (who claimed special properties of the pyramids were responsible for mummification).

Apparently the winery’s original plan, according to the documentary on the website, was to build something resembling a Roman arched cellar/vault similar to some of the wineries in France (check out this French winery for an example). Due to the sandy ground underneath the Summerhill winery, an arched vault wasn’t possible so instead a pyramid was chosen. A pyramid may seem like a big shift from the rounded arches, but the common denominator here is something called “sacred geometry”, which you’ll also see mentioned on the website. Sacred geometry is basically the idea that certain shapes and mathematical ratios carry esoteric significance, and that’s why they’re found so often in what’s deemed to be sacred buildings and/or spaces (i.e. temples, churches, temene, etc.) all around the world. You need to be in tune with these shapes and ratios in order to understand their true meanings.

The idea of sacred geometry is linked to the theory of an ancient, highly advanced civilization from which most of the world’s cultures come from. The theory is that this fancy civilization had all sorts of fancy technology and knowledge and was wiped out by the Younger Dryas (YD) Impact event 12,000 years ago. The Younger Dryas Impact (YDI)hypothesis argues that a comet hit the earth, specifically in North America, wiping out this fancy civilization and triggering the Younger Dryas cooling period. If you’re thinking that a fancy civilization with high tech and super knowledge sounds an awful lot like Atlantis, you won’t be surprised to hear that some people have tried to connect Atlantis to the YDI hypothesis. Sometimes it’s through the suggestion that this comet impact triggered massive floods, including the one that sank Atlantis. But more often it’s through this idea of a cataclysmic pole-shift, in which the comet impact caused a huge magnetic pole shift that moved this fancy civilization (that some argue was Atlantis) to the south pole and buried it beneath Antarctica’s ice. Sacred geometry is supposedly some of the proof that this ancient civilization once existed. That their advanced knowledge can be found within these sacred shapes, and as these sacred shapes are incorporated into various structures those structures essentially become encoded with this esoteric knowledge.

The Summerhill winery chose a pyramid because they were inspired by the Great Pyramid of Giza, which they describe as being built to “absolute sacred geometry”. They do acknowledge it as being human-made, but sacred geometry was never about aliens. They bring up the usual “we don’t know how the pyramids were built so well because we don’t have that kind of technology today and the blocks are too perfectly aligned” argument. I think they’re basically arguing Egyptians were in-tune with this esoteric sacred geometry and knowledge and that’s what enabled them to built the pyramid according to pi and phi (parts of sacred geometry and often compared to the Fibonacci Sequence). And I say “think” because there are some people (Robert Schoch, for example), who think that the Giza pyramids and sphinx are actually over 12,000 years old and were built not by Egyptians, but by this earlier fancy civilization.

The winery doesn’t make it clear if they buy Schoch’s hypothesis or not, but what they do literally say is that the “Pyramid’s phenomenon are established”. That’s not true. At all. I’ve had Summerhill Pyramid wines a couple of times and they’re delicious, but that has nothing to do with the pyramid. The Summerhill pyramid will not enhance the “receptiveness” of the wine. But it will certainly enhance the price tag on the bottle.