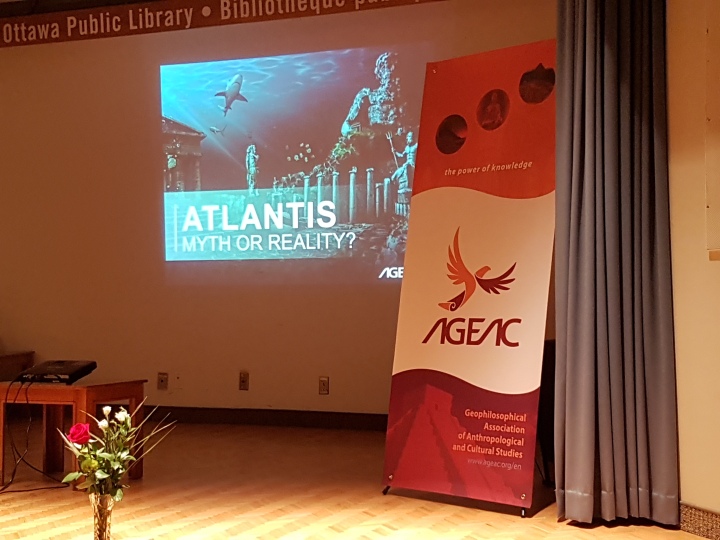 Pic: The stage in the auditorium where the talk was held

Last weekend while out on the town, my husband and I came across several posters for a speaking event titled, “Atlantis: Myth or Reality?” As you know by now, pseudoarchaeology is an interest of mine and Atlantis is one of the most popular pseudoarchaeological theories out there. So of course I had to go to this talk!

That free talk, put on by the Geophilosophical Association of Anthropology and Cultural Studies (AGEAC), happened today (June 2, 2018) at the main branch of the Ottawa Public Library. My husband and I were one of about 30-40 audience members in attendance. I have to admit that this hour-long talk was not at all what I expected. After browsing the AGEAC website a little bit I thought I had an idea in mind of what sort of theoretical philosophy they might adhere to, but by the end of the talk I realized that I really was not at all prepared for what I had heard. Eight pages of notes later I still found myself puzzled. But, after doing some research into the history of the myths of Atlantis, everything started to click and fall into place. I knew I wanted to share my experience with you through a blog post, but due to the sheer amount of information I took notes on I realized I was going to have to split it into two posts. Let this post, Part 1, serve as a bit of background information for you. Part 2, which will follow shortly, will be about the talk itself.

A little over 2400 years ago there was a Greek guy named Plato (428 – 348 BC). Plato was a philosopher, and today is considered to be one of the most influential philosophers to have ever lived, with an especially strong influence on Western science. Plato liked to write, especially allegorically. For those unfamiliar with the term, ‘allegory’ is a type of metaphor in which an author invents people, places, things, and events to make a symbolic statement typically about societal or political happenings in real life. And that’s exactly what Atlantis was – it was a metaphor. It was never a real place.

Around 380 BC, Plato wrote the Republic. In the Republic, Plato and his teacher Socrates basically talk about the idea of justice and the state of justice in a bunch of different existing cities and regimes. They hypothetically invent a bunch of cities and regimes to act as comparing oppositions. This ultimately leads them to invent and describe what they believe would be the perfect society (‘Kallipolis’), which symbolically represented Athens. Twenty years later, around 360 BC, Plato wrote Timaeus and Critias. Timaeus takes place the day after Socrates’ big rant in Republic. Socrates wants to hear about how his fictional perfect city would interact with other cities, so he and a bunch of other guys talk about exactly that. One guy, Critias starts talking about another guy, Solon, who had supposedly traveled to Egypt and translated Egyptian records describing the island city of Atlantis, which was the antithesis (exact opposite) of the perfect society that Socrates had described. Critias is the story that Critias shares with the group about that time the kingdom of Atlantis tried to take over Athens but failed because Athens was just and orderly and Atlantis was not. To summarize what Critias writes of Atlantis: Atlantis belonged to the Greek god Poseidon, who fell in love with a mortal woman and they had many children together. It was an enormous island, comprised of concentric rings of water and land that together made the continent larger than Libya and Asia combined. In the early days, Atlantis was very advanced, orderly, and law-abiding and had many large fancy structures and statues. But over time as the city began to grow and the citizens became more mortal-like and less god-like the city became corrupt and unruly. Atlanteans wanted to grow their empire and they began to spread out, conquering parts of Libya, Egypt, and Europe. The mighty Athenians led a resistance against the disorderly Atlanteans, beating them and liberating the occupied lands. To punish Atlantis, Zeus caused an earthquake that sunk the continent in a single day and night.

The Transformation of Atlantis from Myth into “Reality”

The modern pseudoarchaeological myths of Atlantis can trace their roots to the 16th century. Spanish historians in the Americas (e.g. Francisco Lopez de Gomara) believed the Indigenous peoples of the Americas were descendants of survivors of the sinking of Atlantis. Some other historians suggested instead that the Americas were a literal piece of Atlantis that had survived its destruction in the flood (e.g. Girolamo Fracastoro).

Atlantis also collected popularity through the work of 16th and 17th century novelists inspired by the writings of Spanish historians and explorers.  In his famous novel  Utopia, Sir Thomas More wrote a pseudo-ethnographic tale about religion and politics of a fictional island society somewhere in the Americas.  And Sir Francis Bacon continued with this line of thought in his fictional novel The New Atlantis, in which he placed a mythical island society somewhere west of Peru.

In the 18th century, Swedish scholar Olaus Rudbeck argued that Atlantis was originally located in Sweden and that it was the mother culture for all cultures. While his Sweden idea quickly fell out of favour, his mother culture idea caught on. In the mid-19th century Charles Etienne Brasseur de Bourbourg proposed that the Maya had descended from the Toltecs, who were Atlanteans that had survived the destruction of Atlantis and traveled to Mesoamerica. Later, inspired by Brasseur de Bourbourg, Augustus Le Plongeon excavated several Maya sites and began to invent histories tying them to Atlantis. Most notably, he suggested that Atlanteans were descended from the Maya peoples.

In 1882 Ignatius Donnelly published Atlantis: the Antediluvian World, widely considered to be the foundation of today’s Atlantis myths. In The Antediluvian World, Donnelly made 13 bold claims regarding Atlantis. These include (but are not limited to): Atlanteans traveled all around the world and all civilizations are descended from them (Egypt was the oldest Atlantean colony), Atlantis was home to incredibly advanced technology, and that the Phoenician alphabet was derived from the Atlantean alphabet and was passed onto the Maya.

From Donnelly’s work the myth of Atlantis spread and snowballed, subject to various reinterpretations. The Theosophical Society (founded in 1875) discussed Atlantis in founder Helena Blavatsky’s The Secret Doctrine (1888). The Theosophists believed in racial evolution and the idea of “root races”, in which Atlanteans were considered to be the fourth root race. They were succeeded by the fifth and most superior race – the Aryan race (which of course Blavatsky herself was part of). Blavatsky had been inspired by (and reshaped) an earlier theory proposed by astronomer Jean-Sylvain Bailly, in which a giant godlike race of people (the Hyperboreans) had once existed in Northern Europe. After reading what I’ve just written, you should be able to clearly see where this conversation is going – the Nazis used, in part, Blavatsky’s concept of root races to shape their ideological platform during the Second World War (spoiler alert: many neo-Nazi and white nationalist individuals/movements today also embrace Atlantis thanks to their ideological forbearers. More on that in some publications I’ve got coming soon).

The Theosophical Society, and Rudolph Steiner founded offshoot the Anthrosophical Society, also believed in the Akashic Records (though Blavatsky did not use the term ‘Akashic’), a collection of all human events, thoughts, emotions, memories, etc. from the past, present, and future and encoded on a non-physical plane of existence. In the 1920’s, Edgar Cayce, famous for his alleged psychic abilities, began to claim that many of the subjects he performed readings for were reincarnated Atlanteans. Cayce claimed he could tap into their Akashic records to give detailed descriptions of Atlantis, such as the Atlantean use of crystals for energy and their highly advanced technology (e.g. flying machines, which were originally mentioned by Steiner). He also claimed that Atlantis would rise again in the 1960’s and that there was a Hall of Records beneath the Egyptian Sphinx which held the historical texts of Atlantis.

In Conclusion – The Main Points

I could go on talking forever about the transformation of Atlantis from myth into reality, but I’ll stop here for now (if I start to get into HP Lovecraft and Atlantis this post will never end). I really just wanted to share some of the main hits – modern Atlantis myths are largely a blend of Plato, Donnelly, Blavatsky, and Cayce’s ideas. With advancements in understanding how plate tectonics work (that they simply spread the sea floor around and don’t contract so they couldn’t have sucked Atlantis down), today’s beliefs in the myth of Atlantis have changed some but not lost any of their popularity. The myth still hangs on, perpetuated by books and television documentaries suggesting there’s always some new bit of “proof” that needs exploration (might I suggest you check out my 2021 CAA presentation to find out how the concept of searching for proof, or ‘discovery paranormalism’, fits into my definition of pseudoarchaeology). Or by societies like the AGEAC, whose presentation I’ll describe in Part Two.

A collection of sources on Atlantis by Jason Colavito

The Story of Atlantis

Card, Jeb J. 2018. Spooky Archaeology: Myth and the Science of the Past. University of New Mexico Press, Albuquerque.

One thought on “The AGEAC Talk Part One: A Brief History of Atlantis”